Ca Mau is a coastal delta province, located in the interior region of the northern hemisphere, near the equator, and also located in the Asian monsoon region, so the mild climate of Ca Mau is in the equatorial, tropical monsoon, with 2 distinct rainy and sunny seasons.

The rainy season lasts from May to November, on average from 170 to 200 days/year. In the west and southwestern areas of the province, the rainy season usually starts earlier and ends later than other areas. Average rainfall between months in the rainy season is not much different and ranges from 200mm to 400mm/month.

The wind regime is both influenced by tropical characteristics and influenced by the monsoon mechanisms in Southeast Asia. Every year, there are 2 main wind seasons: winter monsoon (northeast monsoon) from November of previous year to April of next year and summer monsoon (southwest monsoon), starting from May to October. In the dry season, the prevailing wind direction is northeast and east. In the rainy season, the wind prevails in the southwest or the west. The average annual wind speed in Ca Mau is small, inland is only from 1.0 to 2.0m/sec, the stronger offshore wind is only 2.5 to 3.5m/sec. In the rainy season, there are occasional thunderstorms or tornadoes up to level 7 and 8. Storms are but not many and not great. The weather and climate in Ca Mau are favorable for the development of fishery – agriculture – forestry towards large commodity production. 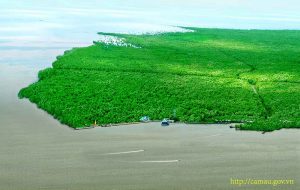 Ca Mau is the southernmost province of Vietnam, located in the Mekong Delta region, was re-established on January 1, 1997. The territory consists of two parts: the mainland and the territorial waters. – The mainland: 5.294.87 square km, ranked 2nd and equal to 12,97% of the Mekong Delta area, equal to 1,58% of the national [...] 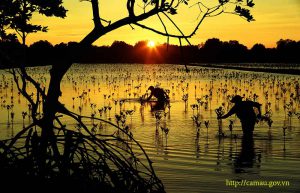 Ca Mau is a delta with many rivers and canals, low terrain, flat and often flooded. Average height of 0,5m to 1,5m above sea level. The terrain direction is inclined from north to south, from northeast to southwest. The local low-lying areas of Thoi Binh and Ca Mau connecting Phuoc Long, Hong Dan and Gia [...] 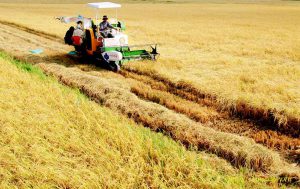 Ca Mau is a new land deposited by alluvium, formed by two currents in the East Sea and the Gulf of Thailand, receiving alluvium from the Mekong River. In general, the province’s land is young, newly exploited and used, with average fertility, high organic matter content but due to alum and saline intrusion, it is [...] 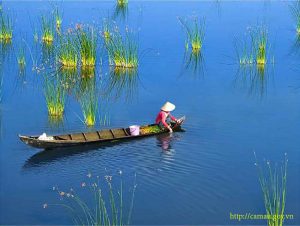 The surface water (including surface water of rivers, canals, fields, coastal waters) of Ca Mau province is mainly rainwater and water from the sea coming along the tributaries. Surface water source is fresh water, mainly concentrated in U Minh Ha cajuput forest, agricultural production area in the north of Tran Van Thoi and Thoi Binh [...] 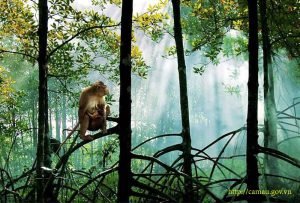 Ca Mau had a total forest area of ​​about 103,723 ha, accounting for 77% of the forests of the Mekong Delta, mainly submerged forests. Of which, natural forest is 9,179 ha and planted forest 94,544 ha. Ca Mau has 3 main forest types: Ca Mau mangrove forest has a unique and diverse ecosystem, ranked 2nd [...] 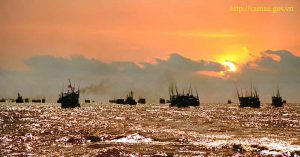 Ca Mau has a coastline of more than 254km, accounting for 1/3 of the coast in the Mekong Delta, equal to 7.8% of the coastline of the country and has many estuaries connecting to the sea such as Ganh Hao, Bo De, Ong Doc, Ong Trang, Bay Hap, Khanh Hoi … On the sea, there [...]