Agricultural production in Ca Mau has been shifted towards exploiting rice strengths in key rice areas to ensure food security and converting a part of low-yield rice land to more efficient aquaculture. In the restructuring of production in recent years, agriculture still plays an important role in promoting economic development, meeting food needs and partly food needs for the people in the province, contributing to increasing revenues, improve people’s lives, ensure food security, stabilize the market. 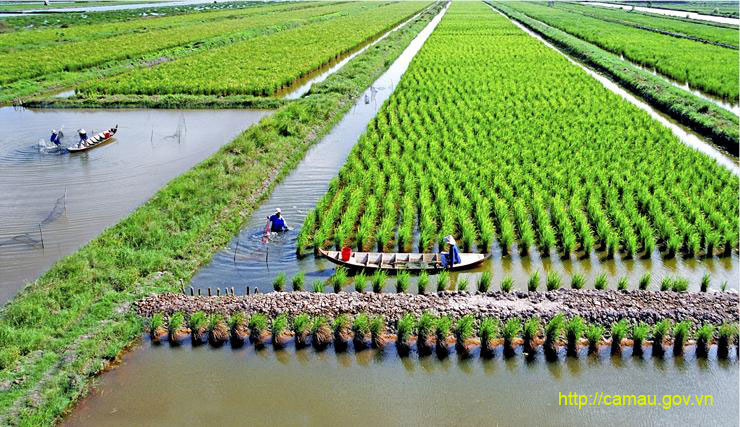 Because of converting part of low-yield rice land to aquaculture, in recent years, the area of ​​crops in Ca Mau has decreased sharply. In 2016, the area of ​​rice cultivation reached 71.840 ha, equaling 79,7% compared to 2015. In which, summer-autumn rice seed sowing was over 36.500 ha; 6.049 ha for winter rice cultivation; produce 01 rice crop on shrimp farming land of nearly 30.000 ha. The cultivated area is over 108.300 ha, reaching 85,1% of the plan, 85,6% as compared to 2015. Cultivation productivity reaches 4,42 tons/ha, reaching 96,5% of the plan, up 20,4% compared to 2015. Total rice production reaches 496.500 tons. With this output has basically met the food needs in the province, making an important contribution to ensuring food security, stabilizing the market for economic development.

In recent years, Ca Mau has implemented the project “Improving productivity, quality and efficiency of Ca Mau shrimp – rice production”, which has contributed to improving rice production and improving aquaculture environment. The production value generated per 1 ha of arable land annually increases an average of 11,2%/year.

Large model field model has been actively implemented in the communes with conditions of 2 districts Tran Van Thoi and Thoi Binh.

Rice accounts for most of the province’s annual crop area, after the decrease in cultivated area due to restructuring of production (according to the Government’s Resolution No. 09/2000/NQ-CP of June 15, 2000 on economic restructuring and consumption of agricultural products, Ca Mau province has transferred a large area of ​​rice land and other inefficient crops to aquaculture), from 2005 until now the rice cultivation area The province’s relative stability compared to the period 1997-2004.

Many effective and sustainable production models have been expanded such as combining aquaculture with many aquatic products on the same area, raising natural fish under forest canopy, pond farming, 1 rotation of rice cultivation – 1 shrimp crop, growing vegetables after rice harvest …

Although cattle and poultry raising activities are concerned by the functional agencies, the implementation results are limited, the effectiveness is not high, due to the local specific conditions, mainly small, sporadic, there are not many effective centralized models, not industrial. Therefore, it has not met the demand of consumers in the province and still faces many difficulties. The total number of pigs in 2016 is estimated at 148.950, the poultry is estimated at 1.940.000; 239 buffaloes; 315 cows.

However, in the process of developing agricultural production of the province also revealed some limitations such as low sustainability in production, low application of science and technology to production, animal husbandry activities, still small, sporadic, household size, large scale farm farming model, thereby making the industry’s production results low compared to the potential and consumption market of the province.

Currently, Ca Mau province is implementing the Project of restructuring agriculture. Accordingly, the Provincial People’s Committee has approved the Plan for restructuring six key agricultural products of the province, including high quality rice, hybrid acacia, gourami, eco-shrimp, sea crabs and bananas. Currently, the Department of Agriculture and Rural Development has actively implemented the implementation steps as planned; at the same time, guide districts and cities to review and adjust the implementation plan of specific restructuring projects of the locality. 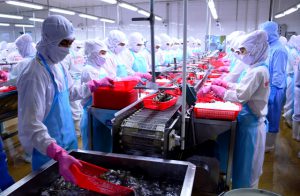 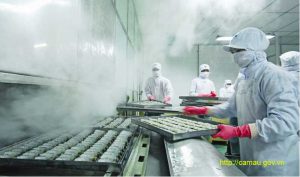